*update... I ended up doing this fix on another Corsa and wrote a more detailed guide. Between the two blog posts you can get a good idea what's involved and how to tackle these water leaks:
http://carsandcode.blogspot.co.uk/2014/03/corsa-c-water-leak-challenge.html


Comments on other threads encouraged me to finally write this work up. If your Corsa C has a water leak I probably have the fix listed in this long post.

These water leaks are a pain and happen gradually but if you catch them early then it's so much easier to dry the interior. Unfortunately my mates car was in a bad way and he lives on a hill which made the problem worse. Water ran into the back footwell, even growing a mushroom on the rear carpet mat. He was even de-icing the car on the inside and so I offered to sort it out even though it was winter and cold outside.

Drivers carpet was soaked so investigation started there, pulling the carpet right back and carefully cutting out the grey sound insulation sponge on the drivers side. The sponge was soaking wet and I cut it at the edges to ensure I could refit and glue it back into place. Research on the internet showed people who had tracked the problem to a perished rubber seal on a metal plate where the brake servo bolts too. I used a water hose on the windscreen and water started dripping from the plate on the inside and collecting in the footwell.....Bingo!

Researched this and found three ways to fix this:

1) Quick fix and cross fingers approach. The garage remove the scuttle panel, clean out the rain gutters then spray underseal all around the brake servo. The aim is to cover the rotted seal so it becomes water tight again. This seems like a bodge to me and will only work if the seal has dried out and barely damaged. People have reported this working but I'm skeptical about the long term results.

2) Remove the brake vacuum cylinder to access the full rotted seal. Dig out the seal and re-seal then overcoat with underseal for additional protection. This method does not require bleeding of the brake system as the reservoir can be drained and moved to the side. Found this out from here... Brilliant post.


3) Similar to point 2 but seen people removing the metal plate completely but this involves more removal of parts like the pedal box and steering column. Hats off to this guy who makes this appear simple e.g http://www.diynot.com/forums/viewtopic.php?t=219554


Point 3 is the ultimate way of doing this but a garage would not be able to do that without charging more than the car was worth! I went for method 2 as your removing nearly all of that old seal by digging it out without touching the pedal box or steering column.


Dismantling was pretty straight forward and the linked post covers the job very well. My additional tips would be:

- scuttle panel slides out towards the front of the car. It wraps around the windscreen edge so don't try and pull it up or you might damage the windscreen.

- Brake vacuum cylinder has some awkward bolts to undo from inside the car. Extension bar and a universal joint are your friend here and get the job done.

-Drain the brake fluid from reservoir using syringe with small tubing attached. If your going to re-use the fluid when rebuilding keep it in a clean air tight container. *Update, top tip from Lee in the comments for doing this: 'Tip for draining some brake fluid; Purchase any type of sprayable bottle, take off the cap and stick the pipe inside the reservoir and squirt it into the spray bottle. Easy and no mess.'

- When disconnecting the brake servo return hose, cover it with a rag, wear gloves and eye protection. Last thing you want is it flicking drips of fluid in your face as it disconnects.

-Buy a roll of cheap plastic sandwich bags. As you remove bolts and screws bag them up then attach the bag to the part they came from. If the part stays on the car then label a bit of paper in the bag instead. Different sizes of bolts from same part get masking taped around the thread and labeled. Also take photos on phone before you dismantle various bits. I always do this and while it takes more time, it ensures that all bolts go back in the right place and everything is like factory fit. Nothing worse than seeing someone chuck bolts in a big tub then trying to put a car back together any old how!

The seal was badly rotted probably accelerated due to leaves and muck filling the rain gutters. This raises the water line above this seal so it's constantly submerged when it rains. It's important you use a good sealant here like 'Tiger Seal' but I actually used a plumbers sealant called 'Plumbers Gold'. Plumbers gold is the business and can be applied to wet surfaces. It even resists temperature extremes '-40 to +150 degrees Celsius' making it suitable for an engine bay. This was my sealant of choice as it was December and keeping everything 100% dry while it cured overnight would be tricky. Dug out nearly all of sealant by scraping it out with a screwdriver and roughing up the surface with a scotch pad, so sealant would adhere. I dried out the seal and plate as much as possible with a hair dryer. Pic shows the finished seal before I covered it with black underseal to provide extra protection. 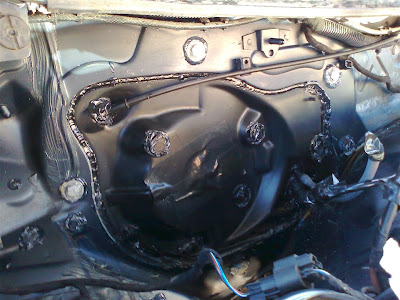 Re-assembly is quite straightforward with the following tips:

- The brake vacuum cylinder attaches to the bulkhead plate with a paper thin sticker gasket. This was soaking and also perished, so I used sealant instead. It's purpose is to create a water tight seal so sealant is fine but use a small amount in the shape of the gasket. *Update is clear from the comments that this part is easily missed but crucial you either replace it or use sealant instead. Item 4 (seal,ring) in the linked parts diagram is what I'm referring too. http://www.dragon2309.co.uk/corsa-parts-cat/brakes/brake_servo_unit.html

- Scuttle panel separates into two half's but refits easier as one unit.

Ended up removing the interior and taking out the carpet as the water had saturated the underlay and that would not dry in winter. Check out the pool of water I found under the carpet in the rear footwell! 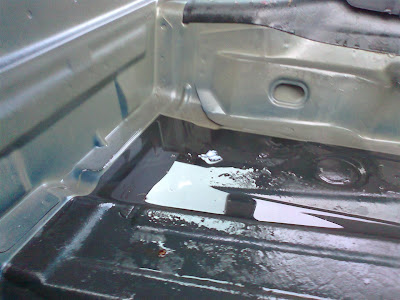 Carpet can be removed in one piece but i had to make a cut on two joining strips that run under the center console. This saves having to remove the handbrake assembly and wont be seen when refitting. Rear seat belt loops unbolt then rotate them from horizontal to vertical before they unhook from the chassis. Make a note on which side some of the console trim pieces belong too as it helps when you assemble it again months later :-). 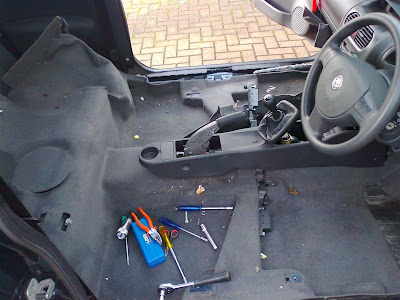 So I was left with a Corsa rally style interior: 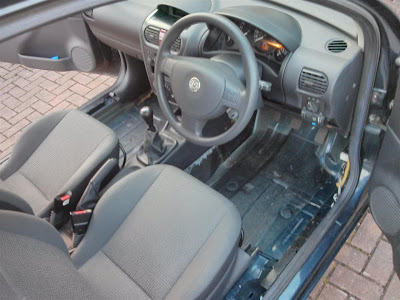 While taking out the interior I noticed the passenger side carpet was actually slightly wet, which initially I thought had come from the drivers side leak. I felt around the center of the car and gear stick shaft which was dry, this set the alarm bells ringing. Happened to recall reading online that the relay cover is the cause of any passenger water leakage. Vauxhall call this the Body control Module (BCM) cover and it's next to the battery on the passenger side of the car. Again leaves and muck build up till water is attacking that seal and causing it to rot. Removed the battery and then cover to find that seal perished, but it was Sunday and not able to get a replacement. So aimed to temporary fix the seal until a replacement cover could be ordered. I scraped out the old seal and replaced it with draft excluder, carefully using one strip so that the joint ended up nearest the front of the car e.g. 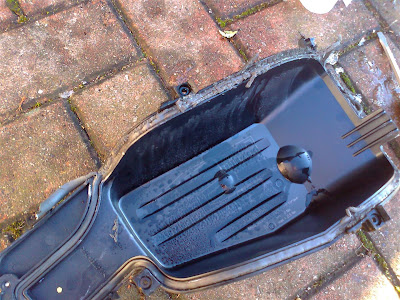 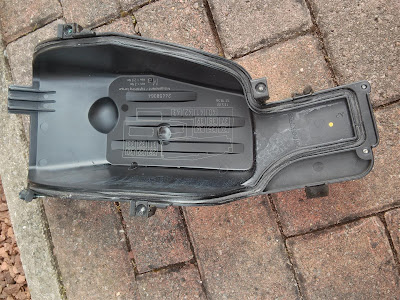 This worked so well that it was still holding fine 6 months later when I finally put the interior back in and changed it for a brand new item. I probably could have left the draft excluder fix in place but the genuine replacement will probably outlast the car.


Nearly sorted this car threw another one at me when I retrieved some of the parts from the boot. I noticed the right edge of the boot was slightly damp. Took out the spare wheel which was covered in rust and water and the matting in the spare wheel well was soaking and moldy. I had seen this problem before on my mrs old car and quickly set about sealing the rear light fittings. They have a foam pad that seals the light to the body work. Over time these become unstuck from the bodywork and water runs under them dripping into the boot. You can buy new foam pads or seal them to the car body work after cleaning all the area under the lights. I opted to seal them to the body work as it was Sunday and this fix worked for me in the past. The pics below were taken before cleaning but you can see where the pad touches the paintwork. Just use sealant on the pad covering that area and re-install. I straightened out that scrunched up pad but yours will be in better shape. 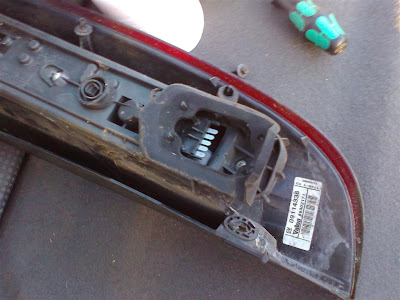 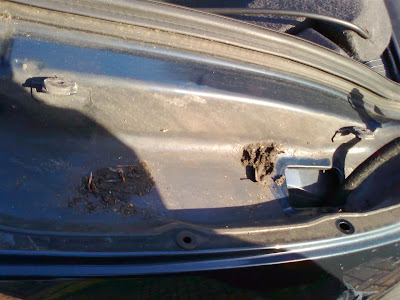 Job done, Final checks were running the car up and down the drive and firmly hitting the brakes. Then double check all the brake cylinder lines that were carefully moved to make sure nothing is leaking. My mate also purchased some 'Small space dehumidifier bags' which were shoved at various points in the car to help dry it out fully. Worked a treat these fixes and car stopped getting moisture on the inside and didn't leak anymore.

Roll on 6 months due to winter and other work and I fitted the carpet and interior back into this car. I secured the foam insulation to the footwells with small amounts of 'gripfill'. Then used some 'Everbuild Stick2' for key areas of the carpet where it should be attached to the matting below. Used it sparingly to secure the area under the center console that I cut for removal. My mate cleaned the carpet with some 'auto gylm carpet shampoo' and it was now smell free and dry. I replaced the BCM cover with a genuine item as planned and changed the pollen filter while I was at it. Remembered to take a picture of the finished bulkhead with everything re-installed. 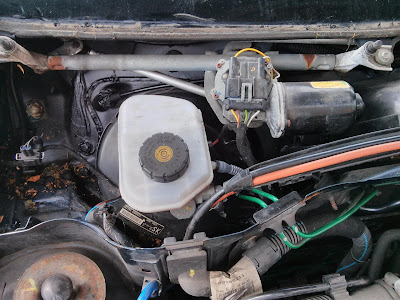